Statement from Grassroots Against I-1000

At this historical moment, we are so proud that Washington voters, who have once again defeated the use of racial preferences by the state government. The margin of victory would have been greater were it not for deliberately misleading language on the ballots. If the confusing and deceptive ballot language designed by the proponents of I-1000 had instead been truthful, there would have been a much greater number of “Rejected” votes.

It is utterly shameful, in the text of I-1000, the Legislature agreed to redefine the term, “preferential treatment,” so they can technically claim the bill eliminates “preferential treatment.” However, the bill gives substantial and specific preference to many groups, in stark contrast to the bill’s stated purpose. The claim that I-1000 would benefit veterans was fiercely dismantled by the Washington State Veterans Bar Association and is also directly contradicted by the bill’s text.

Many thanks to the hard-work and contribution from our volunteers who were able to get enough signatures for Referendum 88 to get onto the ballot. Otherwise, I-1000 would have passed as state law during a midnight session in April by the State Legislature without giving WA voters a chance to have their say.

At this Holiday season, let’s not forget those poor signature gatherers for the Pro-I1000 campaign, who still have not been paid after a year. Many of them are minorities, women and veterans that the I-1000 claims to help. But the Pro I-1000 side sneakily created a new PAC to escape the obligation to pay the $1.1 million in wages still owed to the workers. The money for those wages was spent on campaign propaganda. These workers have families to feed. Please pay them!

Diversity is not only skin deep. Everyone is a unique individual with something to contribute. We should KEEP discrimination ILLEGAL in Washington State. Voters chose to reject the identity politics that separates people by their race, gender, nationality, even sexual orientation to treat them differently. We are all Americans. Race-based affirmative action is not only ineffective but also hurts the minorities it intended to help.

Professor Gail Heriot research data[1] shows that the colleges practicing racial affirmative action actually end up with higher minority student dropout rates and less STEM graduates. The existing Washington State law from I-200 does allow social-economic based outreach program and affirmative action for helping low incomes. But I-200 banned the state government from using race-based preferences. Once again, WA voters made their voice heard in Olympia that they support hard work and individual merits over the empty promises of affirmation action.

For the first time in WA history, more than 210 thousands voters petitioned within 2 months and successfully put the divisive I-1000 back to the November ballot to give voters a chance to reject it.

I-1000 would legalize discrimination and repeal the existing fair law I-200 which was approved by 58% voters over 42%. Voters’ voice is loud and clear: why do we want to repeal a fair law that is working well?

On the Nov. 2019 ballot, you will find an entry titled “Referendum Measure No. 88” . Its content will be the summary of Initiative 1000 (I-1000). I-1000 would allow the government to treat people differently based on race, sex, ethnicity, national origin, sexual orientation, etc. 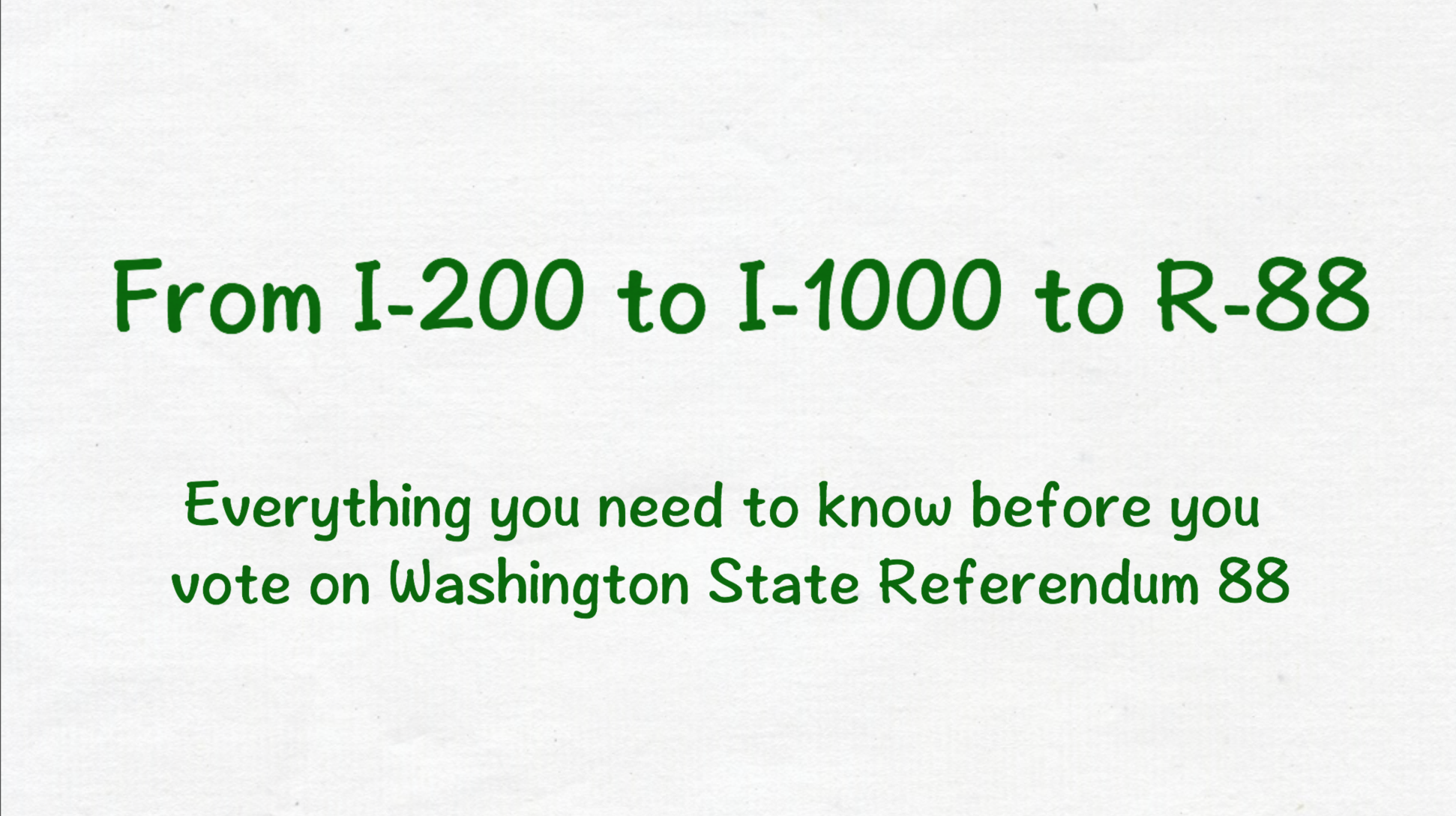 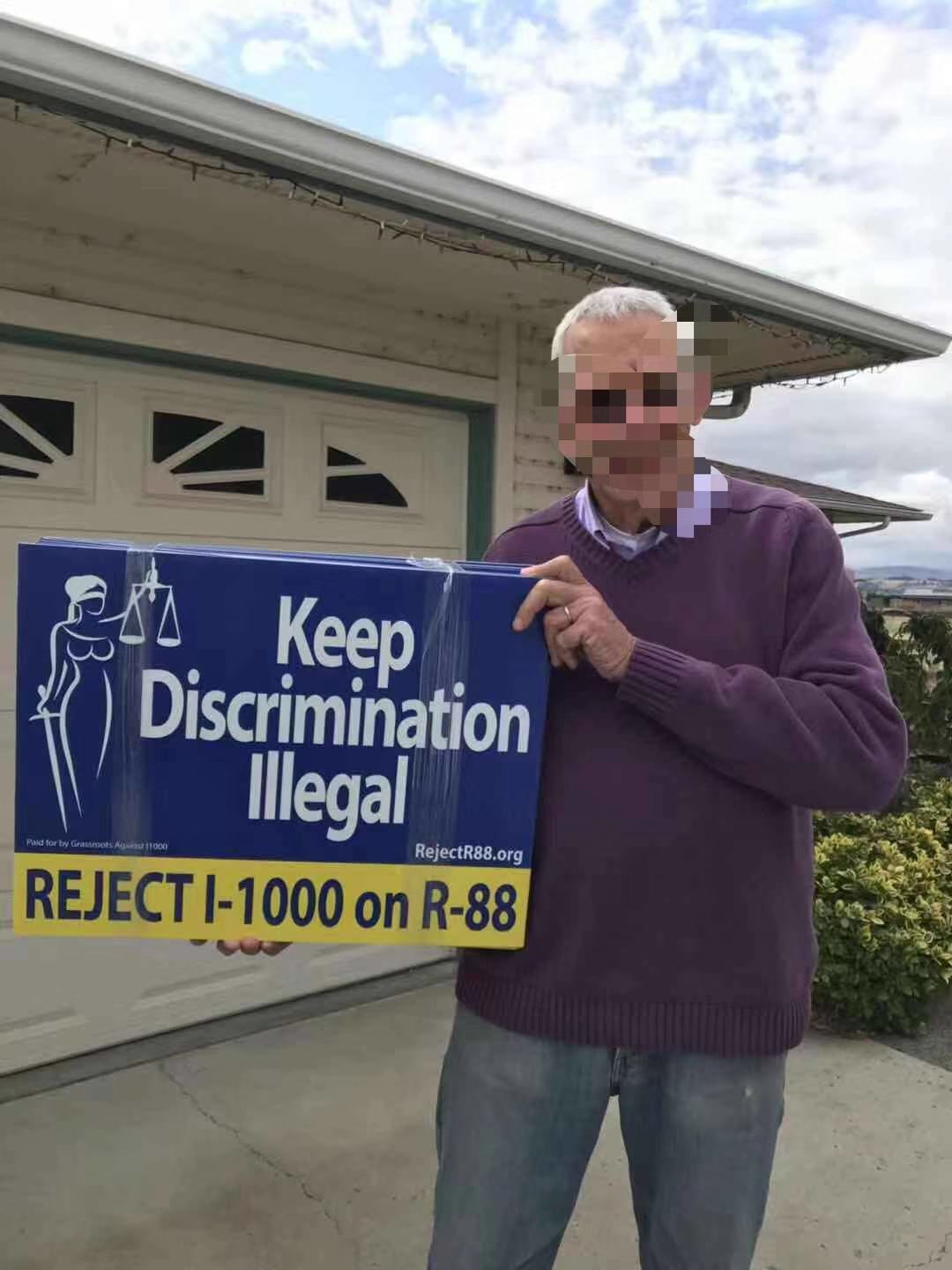 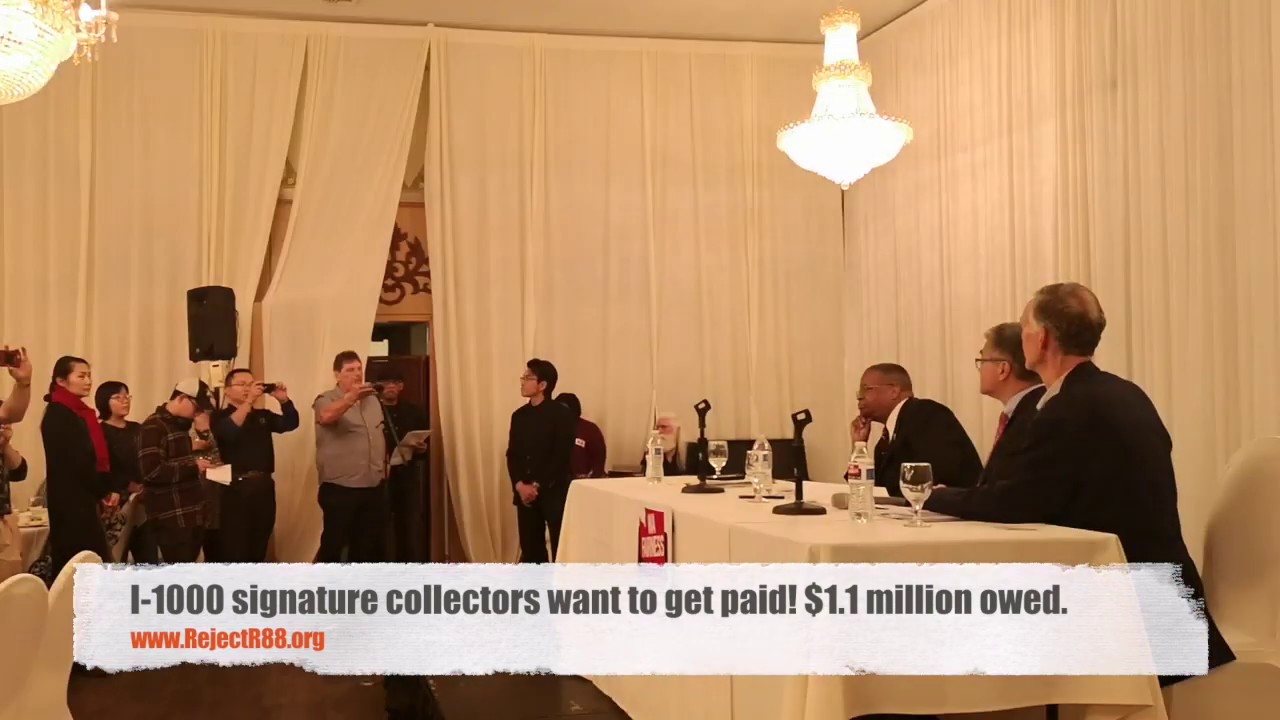 Was the microphone turned off when it went out of control?

I-1000 would force more than half a million veterans to compete for opportunities over other factors such as race, gender, ethnicity, national origin, sexual orientation, etc.

Veterans sacrificed for our nation and they deserve better treatment! [Read more…] 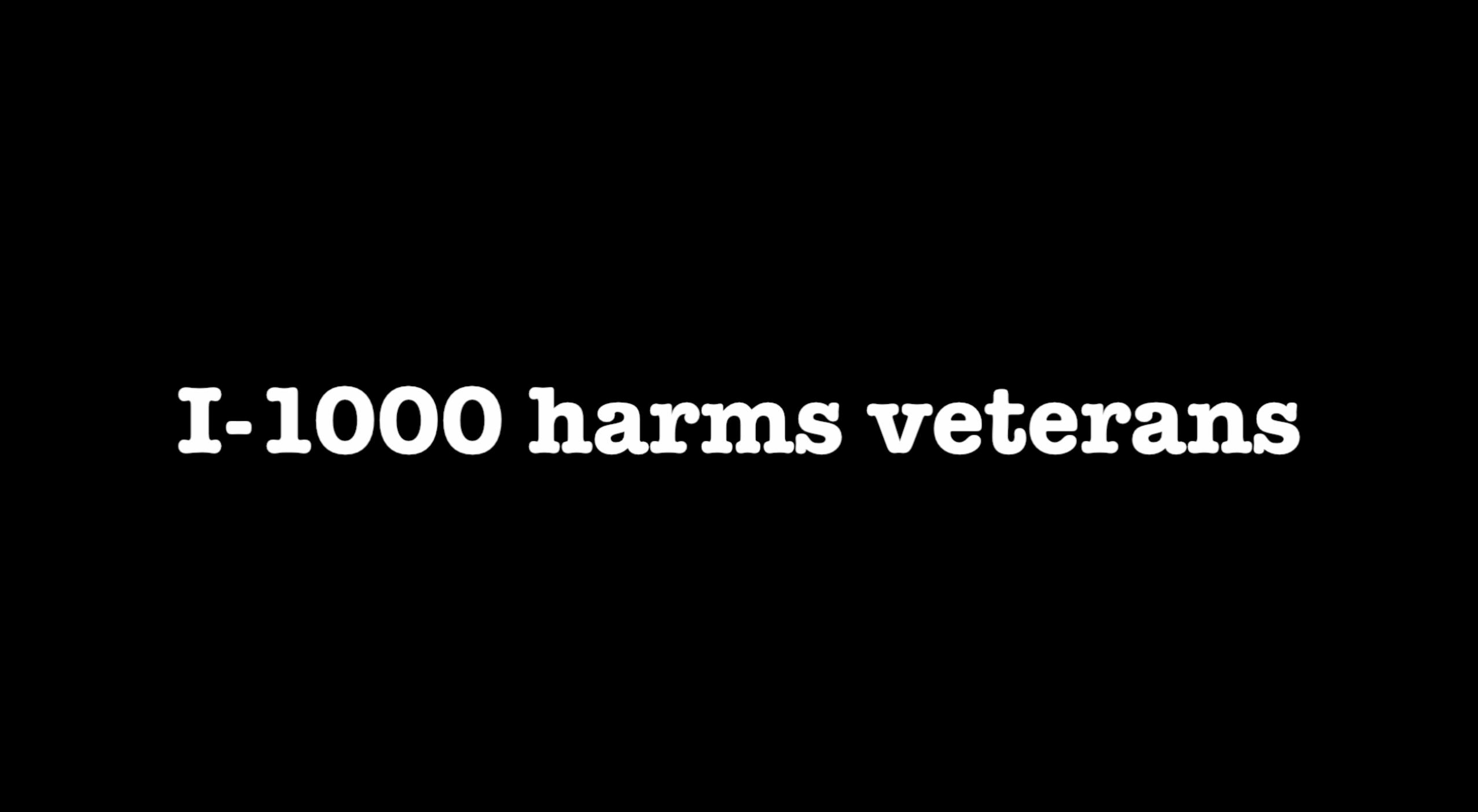 THE EXISTING LAW IS FAIR

WA voters approved I-200 in 1998 by 58.22% approval over 41.78%. I-200 banned discrimination against, or preferential treatment to any individual or group, on the basis of race, gender, ethnicity, or national origin. I-200 does allow outreach programs and policies helping the economically disadvantaged people.

Percentages of minority students in University of Washington increase steadily in the last 10 years due to the outreach programs helping low income and first generation college students. Source.

A new 2019 Pew Research Center survey finds that 73% of Americans and majorities across all racial groups agree that race should not be a factor in college admissions.

Every single person should be judged, not by the color of their skin, but by the content of their character. We are all Americans. It is divisive to separate people by race, gender, ethnicity, national origin, or sexual orientation, etc. and treat them differently. 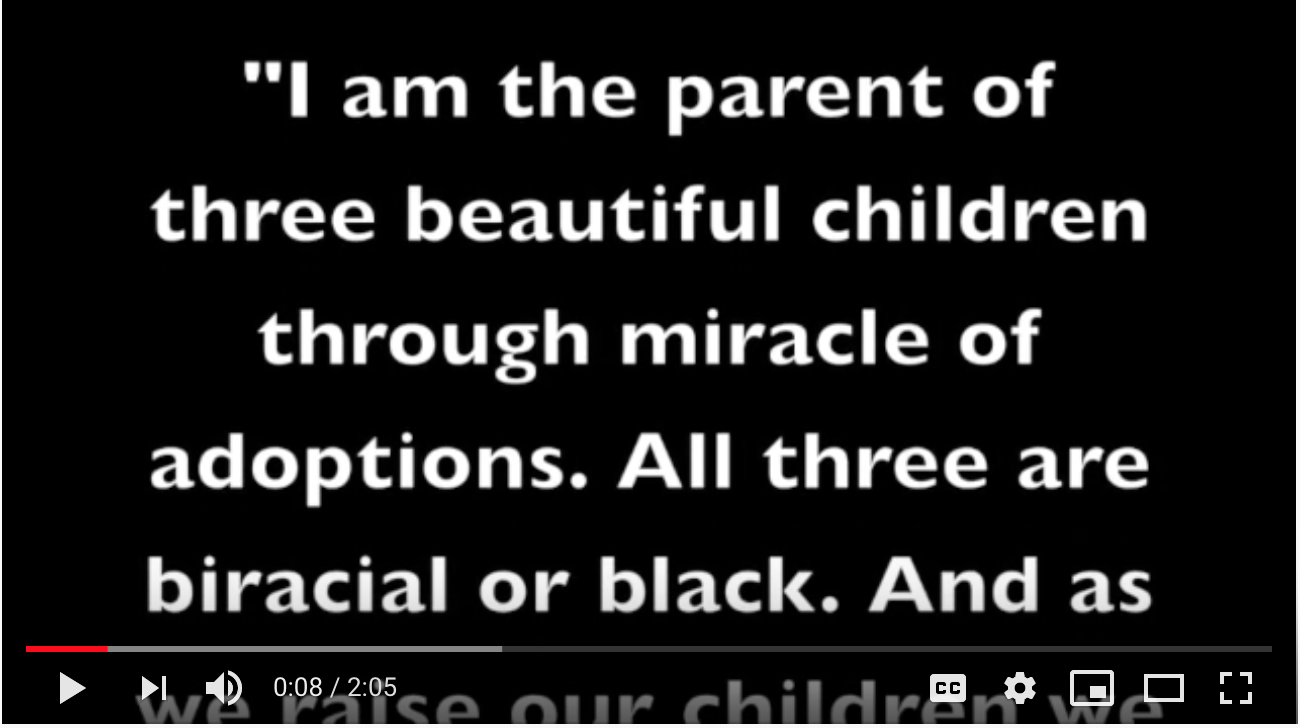 I-1000 would create an unaccountable bureaucracy

I-1000 would create a massive governor appointed commission to enforce I-1000, which would expand government authority, open doors to corruption, and cost millions of tax dollars.

Inslee is seeking a 3rd term. And he is planning to spend $319 million from the state's emergency budget reserve to “help open up 2,100 shelter beds ... provide rental assistance to about 2,900 people, and assist in placing about 1,200 more people in permanent supportive housing”.

Homelessness is becoming a business for Washington government, and an awesome way to request for a bottomless tax revenue and for using emergency reserve. Without curing drug addiction, providing job training, putting healthy people back into workplace, promoting self reliance, $319 million will easily go into vein. And government will continue to have this cash cow, and in the foreseeable future, tax payers will soon need to replenish the emergency fund as well as homeless fund.

The governor's 2020 supplemental budget proposes pulling $319 million from a state emergency fund to pay for housing and homelessness services in Washington state.
View on Facebook
·Share

Share on FacebookShare on TwitterShare on Linked InShare by Email

Next I-2000?
HB 1783 - DIGEST:
Creates the Washington state office of equity within the office of the governor for promoting access to equitable opportunities and resources that reduce disparities, including racial and ethnic disparities, and improve outcomes statewide across all sectors of government.

Share on FacebookShare on TwitterShare on Linked InShare by Email

Retweet on TwitterGrassroots Against I-1000 Retweeted

Brings back memories of a co-worker sharing her family traditions. Happy #Diwali ! https://t.co/rOwboIyLz2